10 June 2019 – New Zealand has the highest known rate of motor neurone disease (MND) per head of population in the world – and we’re stepping up to do our bit to help.

We have just announced a three-year partnership with the Motor Neurone Disease Association of New Zealand (MND NZ) to help enhance the quality of life for those living with the debilitating condition. Every week an average of two New Zealanders are diagnosed with MND, and there is no known cure.

More than 90% of MND NZ’s funding, which is used to support people with MND and their families, comes from fundraising and grants. As the Foundation Corporate Sponsor we will help enable MND New Zealand’s Support Team to better assist people living with MND by establishing a homecare fund for clients and families.

Managing Director Cos Bruyn says MND NZ’s readiness to help in stressful situations across the country and its focus on improving peoples’ quality of life means we have important things in common.

“Diagnosis of motor neurone disease comes as a bolt out of the blue for anyone. MND NZ’s ability to respond with the necessary support – from organising physiotherapy to occupational health and speech and language therapy – makes a fundamental difference to qualities of lives.

“This sort of practical teamwork in the community is something we do every day, and we’re pleased to help a charity that’s doing something similar in a critically important area of health.”

MND NZ’s General Manager Carl Sunderland says it is a source of pride that a company with Fulton Hogan’s values has agreed to become inaugural Foundation Corporate Sponsor.

Despite being heavily researched, the cause of MND is not well understood. Around 90% of people with MND have no family history of it and it typically affects otherwise healthy people between the ages of 50 and 70. MND is actually a group of diseases that cause motor neurones – the nerve cells that control the voluntary movement of the muscles that enable us to move, speak, swallow and breathe – to gradually weaken and waste away. Although the causes aren’t clinically proven, theories relate to the exposure to environmental toxins and chemicals, infection by viral agents, immune system damage as well as genetic susceptibility. 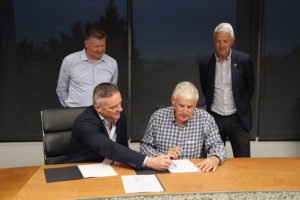 Fulton Hogan is proud to support MND New Zealand and...

Fulton Hogan is proud to announce a new partnership with...